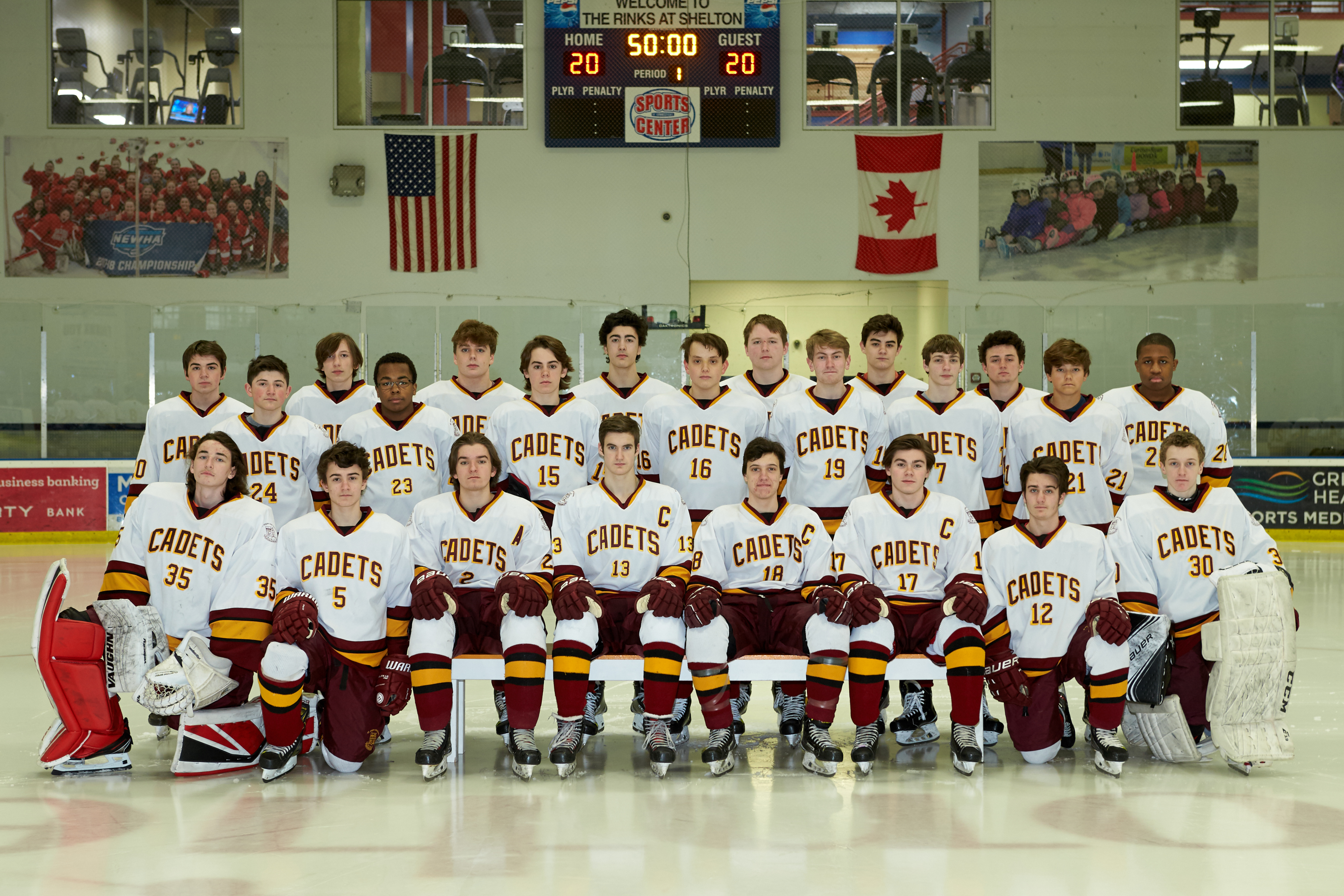 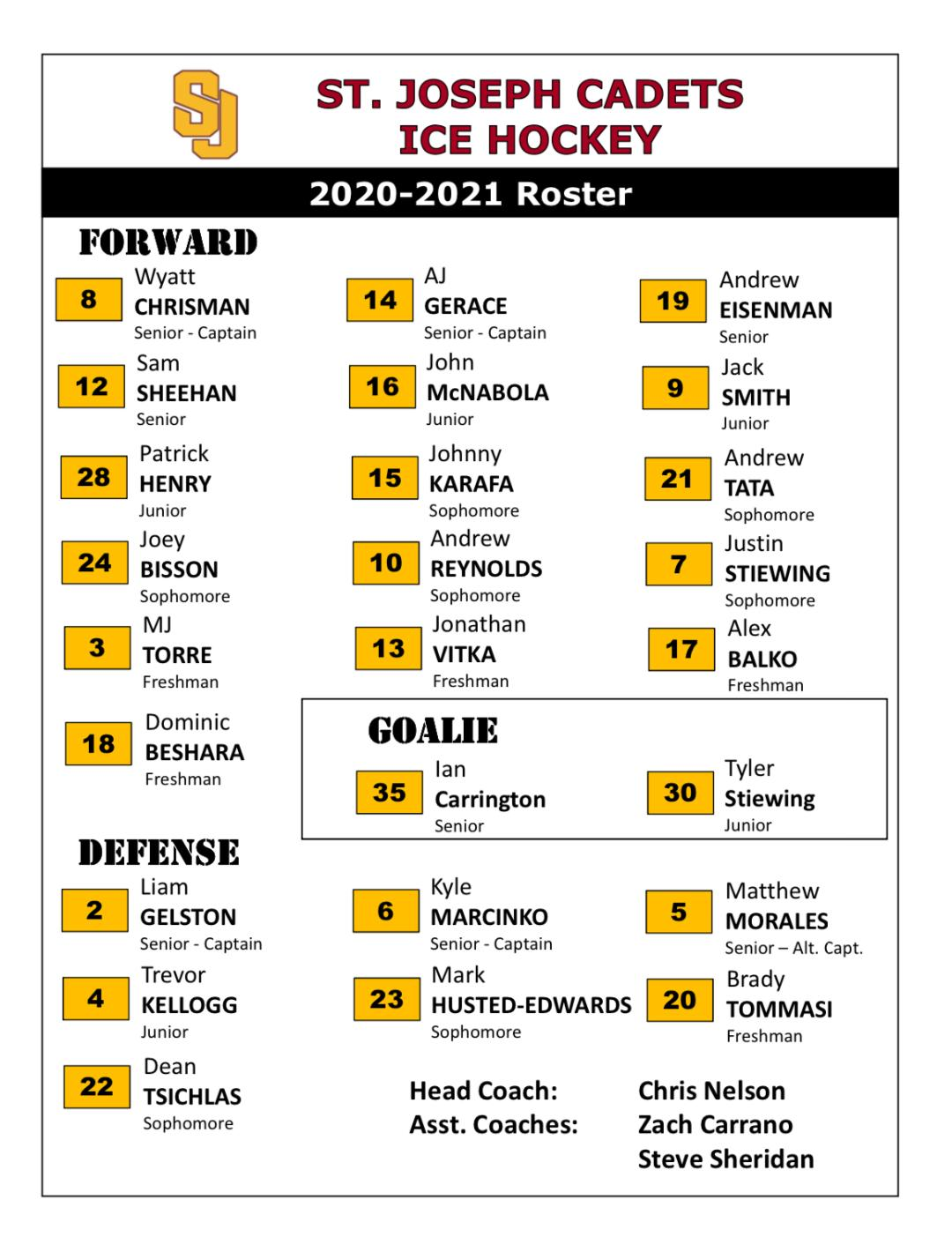 The weary Cadets playing 3 games in 4 days travel to #6 Greenwich. The only bright spots in this one was an Andrew Tata goal with help from AJ Gerace and Kyle Marcinko and Tyler Stiewing with 37 saves. End result was a lopsided 9-1 game. Cadets will rest up and take the ice against #2 New Canaan on Saturday. First 5 games all against top 10 opponents, Cadets record stands at 1-3-0 but they did get some notice for strength of schedule and placed #15 in state after 2 weeks.

Cadets travel to #6 Ridgefield for an early game. Again this game was very even and there was a great compete level from both sides. Ridgefield put one in on the first shift of the game to take a 1-0 lead and the first period closed with the same score. Ridgefield took a 3-0 lead in the 2nd period and again SJ came back with a goal from MJ Torre, his first Varsity goal, assisted by Johnny Karafa and Kyle Marcinko to make it 3-1. Tyler Stiewing with another 33 save game keep SJ in the game but Ridgefield ends up topping Cadets 4-1.

Cadets hosted #5 Fairfield Co-Op, a battle of two very even teams saw the first period almost close scoreless, but Fairfield was able to put one on the board with 5 seconds left in the period. Fairfield came out strong in the 2nd taking a 3-0 lead but SJ came back with a goal from Andrew Tata, assisted by Liam Gelston and AJ Gerace to make it 3-1. Ian Carrington played well and stopped 29 shots but SJ came up on the short end when the clock expired 4-1.

Cadets open the season with an impressive 8-1 victory against #8 Notre Dame of Fairfield. After giving up a goal early, Tyler Stiewing settled in and turned away the next 33 shots. The offensive minded Cadets then scored 8 unanswered goals over the next 40 mins. Led by a hat trick from Wyatt Chrisman, the Cadets also had goals from Andrew Eisenman, Kyle Marcinko, John McNabola, Joey Bisson and John Karafa. Assisting on the scoring, Trevor Kellogg (3), Liam Gelston (2), Karafa (2), Chrisman and AJ Gerace.

The Cadets have their first game of the season today against ND Fairfield at 3pm! Coach Chris Nelson joined the Inside the Box Podcast to discuss the upcoming season! You can listed to the full show here!

It is with much sadness that we inform you of the passing of Eddy LeMaire, our Head Varsity Boys’ Ice Hockey Coach. Eddy passed away on Friday evening. Coach Eddy has served for over seven years as our Assistant Coach and presently as our Head Varsity Boys’ Ice Hockey Coach. Coach is beloved by his SJ players and the youth players in the River Hawks Youth hockey organization. We ask that you keep Eddy and the LeMaire family in your prayers during this difficult time. Click here to read more about Coach Eddy.

Please consider supporting this GoFundMe effort to give back to our close friend and coach, Eddy LeMaire, and his family to help them with the burden of funeral costs.

Please also consider sharing the link below to support Coach Eddy and his family.

3/5/20 The Division 1 State Tournament begins with the #15 Cadets traveling to face #2 New Canaan.

2/19/20 Cadets lose to Immaculate 7-2, getting goals from Johnny Karafa, assisted by Mark Husted Edwards, and Kyle Marcinko. Tyler Stiewing with 24 saves and Ian Carrington with 7 in the loss.

2/10/20 Cadets travel to Ridgefield, go down 1-0 after first period and keep the game close after two periods only down 3-0. Eventually falling 8-0 .

2/3/20 Cadets defeat Staples 3-2 in Overtime. Cadets took an early lead on a Wyatt Chrisman goal assisted by Andrew Eisenman. Staples scores two quick goals to take a 2-1 lead into the first break. After a second period of no scoring, the Cadets tie the game with an unassisted goal by defenseman Trevor Kellogg. Timmy Finkenzeller with the Overtime winner assisted by Johnny Karafa and Andrew Eisenman. Ian Carrington with 26 saves.

2/1/20 Fairfield Warde-Ludlowe host the Cadets and the teams spend the first two periods going back and forth. 1st period ends with the score 1-1, Cadets goal unassisted by Michael Mulligan. The second period is a back and forth battle with Cadets getting a goal from Johnny Karafa (assisted by Andrew Eisenman) and another goal for Mulligan assisted by AJ Gerace and Timmy Finkenzeller, although they head to the break down 4-3. In the 3rd period Fairfield takes command and finishes with six unanswered goals. Cadets head home taking the loss 10-3. Tyler Stiewing with 38 saves in the loss. 1/29/20 Cadets travel to SoNo Ice House to take on McMahon-Norwalk. Wyatt Chrisman with assists from Johnny Karafa and Andrew Eisenman take the early lead 1-0 in this one. The Cadets defense plays stellar and Tyler Stiewing has 37 saves in a shutout victory 2-0 capped by Kyle Marcinko goal assisted by Wyatt Chrisman and Andrew Eisenman. 1/25/20 Cadets host Darien, the game starts competitive with the 1st period ending with the Cadets down 1-0, however they could not get on the board to challenge Darien and eventually fall 8-0. Ian Carrington with 32 saves in the loss. 1/22/20 Cadets vs Wilton. Cadets take command early in this one with 2-0 and 3-1 leads with scoring from Timmy Finkenzeller (2 goals including his first Varsity Goal) with assists from AJ Gerace on both goals. Then AJ finds the net for his own goal unassisted to get Cadets up 3-1. Wilton battles back and in the 3rd period takes the lead 4-3, but Mark Husted-Edwards finds the back of the net to tie it up with an assist from Trevor Kellogg and Timmy Finkenzeller. With the game tied 4-4 in the final minutes of the 3rd period, the Cadets give up the lead and the game, taking the loss 7-4.

1/16/20 New Canaan travels to Shelton and a defensive battle with the Cadets. Tyler Stiewing with a great game and 28 saves but the Cadets end up losing 1-0.

1/11/20 Cadets travel to East Haven to take on Guilford. Cadets come out on fire with goals from Wyatt Chrisman assisted by Timmy Finkenzeller and a goal from Joey Bisson (first Varsity Goal) assisted by Trevor Kellogg and Wyatt Chrisman. This game ended up in overtime with Guilford taking the extra period to win 4-3. Tyler Stiewing had 23 saves.

1/13/20 Hockey Fights Cancer was the focus of this evening as the Rinks in Shelton is filled with luminaries as the Cadets have a successful fundraiser. The game with Trumbull was not as successful as the Cadets fall to Trumbull 8-1.

1/8/20 Xavier comes to the Shelton Rinks and controlled this game from the start. Cadets lose 6-0. Ian Carrington with 27 saves between the pipes.

1/2/20 In town rivals squared up and after a first period which was dominated by the Cadets, they ended up falling 6-2. Goals by Johnny Karafa assisted by Kyle Marcinko and the other goal from Liam Gelston assisted by Wyatt Chrisman. Tyler Stiewing with 30 saves in this one.

12/28/19 Cadets and West Haven go toe to toe in this physical matchup with 8 lead changes but ending with the Cadets on the short end of a 7-4 final. Goals from Johnny Karafa (first varsity goal), Kyle Marcinko, Mark Husted-Edwards (first varsity goal) and Wyatt Chrisman. .Johnny McNabola with 2 assists and Liam Gelston adding another.

12/21/19 The Cadets out shot ND Fairfield in the rematch but fell 2-1. Michael Mulligan with the loan goal with an assist from Wyatt Chrisman.

The Cadets defeated Norwalk-McMahon 2-0 for the team's first win this season! Wyatt Chrisman and Kyle Marcinko scored for the Cadets, while goalie, Tyler Stiewing had 37 saves on the night! 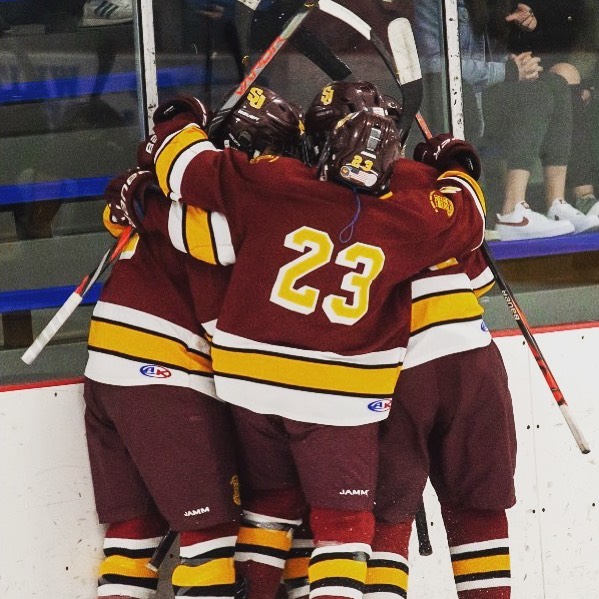 2004-05 The team notched its first win in December 2004.
First goal as a program was scored by Robert Zawadski as a Freshman. He would later be named a Captain in his senior year.