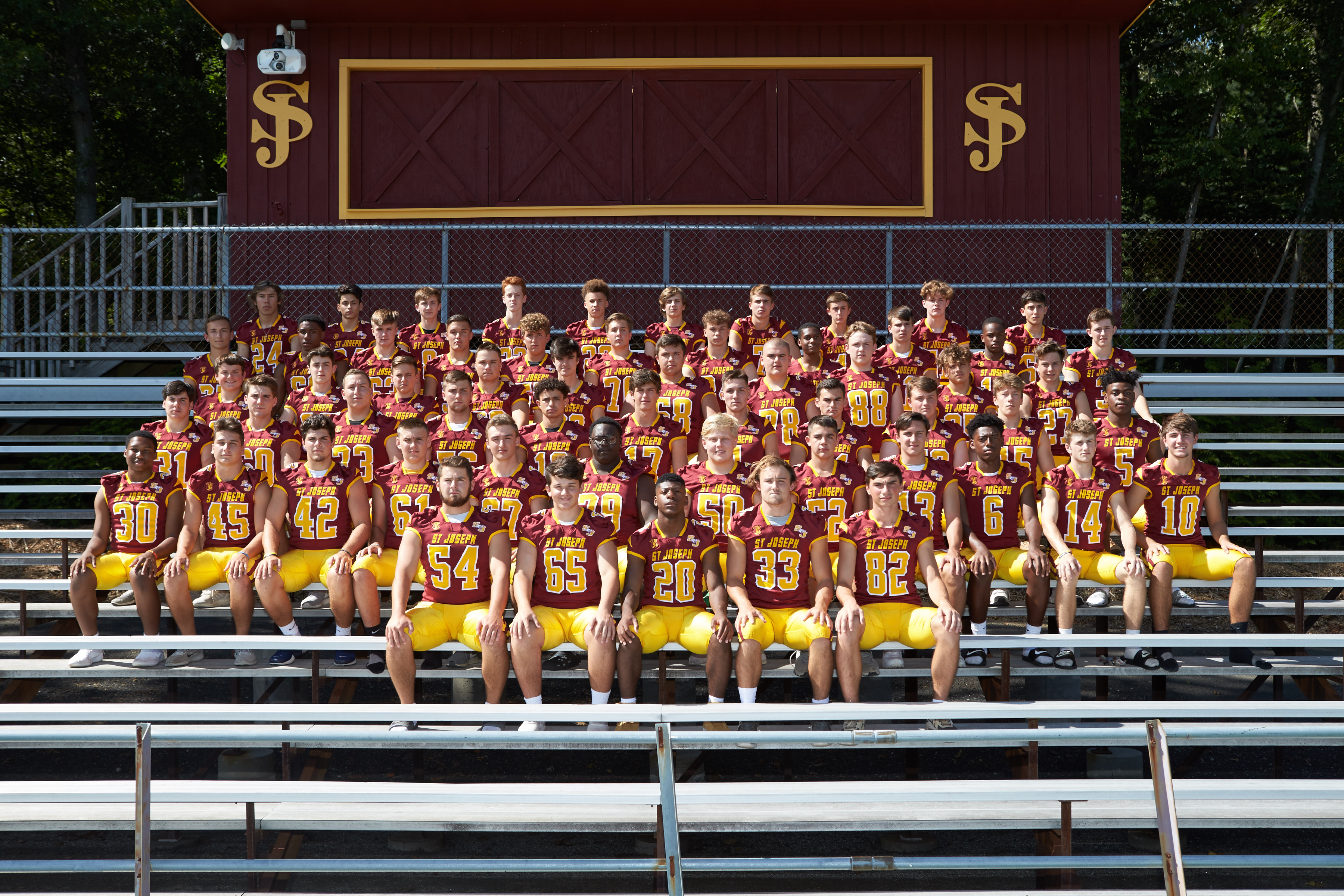 The Class L Champs were honored this past weekend at the Walter Camp Football Foundation Awards Dinner! The Hogs were awarded the 2019 Joseph W. Kelly award which is awarded to CT's top high school football team. Another highlight from the evening was the announcement of senior running back, Jaden Shirden, as the 2019 CT High School Football Player of the Year!! 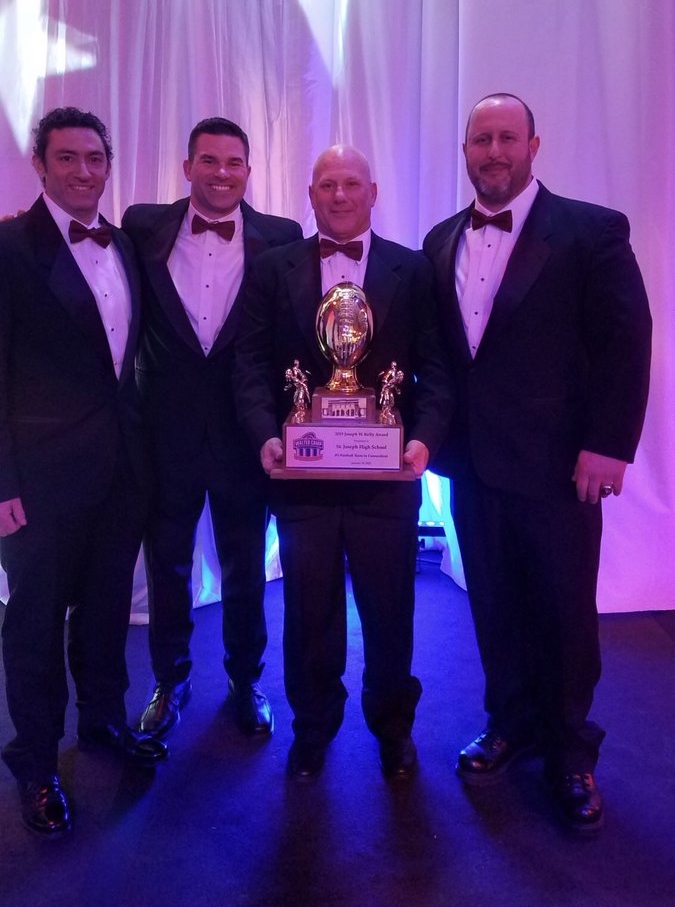 Some of the Hogs surprised their toughest coach and biggest fan, Danika Neugebauer, at her basketball game this week! Danica is the daughter of Coach Steve Neugebauer and is a dedicated and integral part of the program. You can always find her on the sideline of practices and games routing the guys! 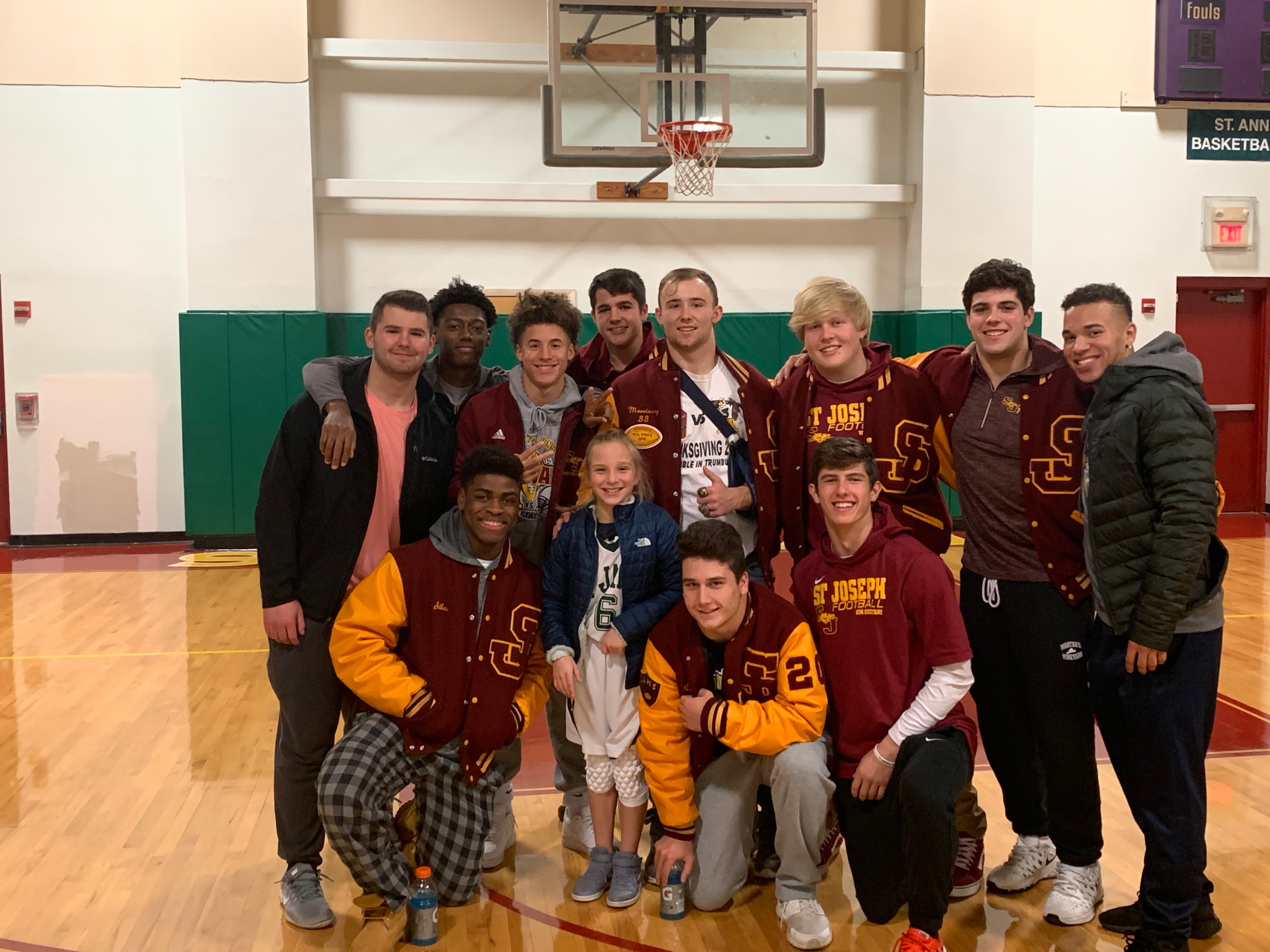 The Hogs Defeat Hand 17-13 for 3rd Straight Championship! SJ Finishes #1 in the State!

"Jaden Shirden, after his usual big rushing day, smiled when his teammates on the other side of the ball came up in conversation, the defense that led St. Joseph to their third CIAC football championship in a row." Click here to read more about the championship game!! 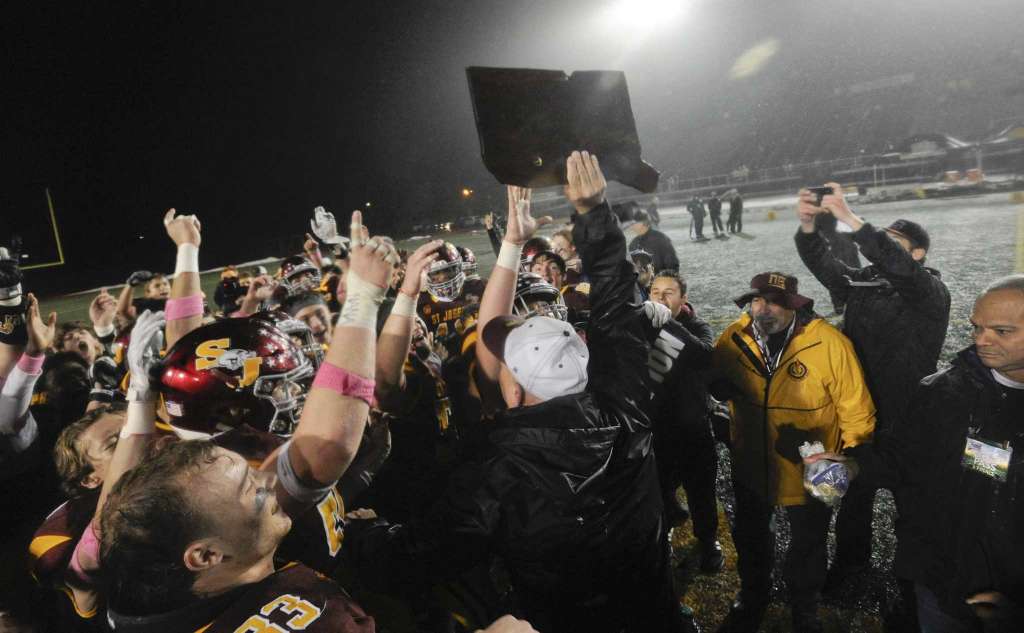 The Hogs (#1 Class L, #2 CT) will take on the Tigers (#2 Class L, #1 CT) on Saturday at 3pm at Veteran's Stadium in New Britain for the Class L Championship! Both teams have won their respective classes the last 2 years and are heading into the championship game undefeated. Ticket are $10 adults, $5 students and seniors and can be purchased at the gate or online here! 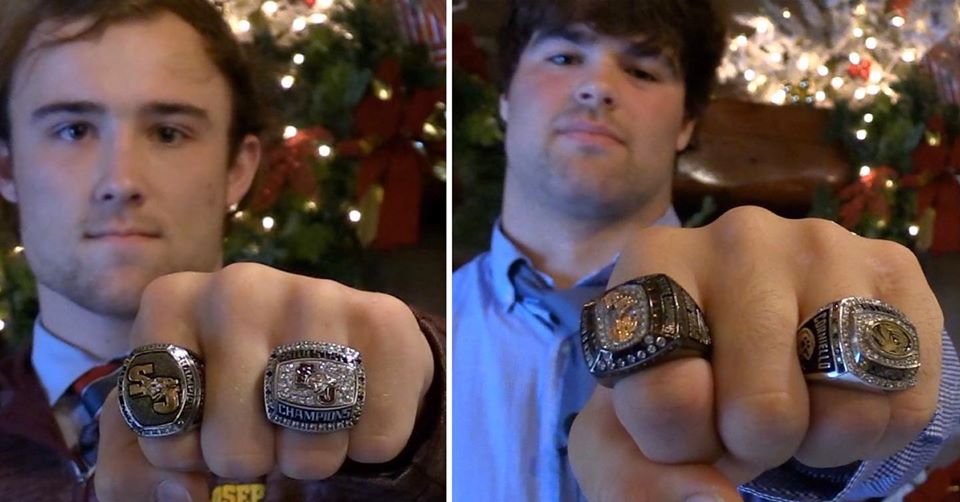 Led behind Shirden's 5 touchdowns, the Hogs blew out New Canaan 42-0 in the Class L Semis! 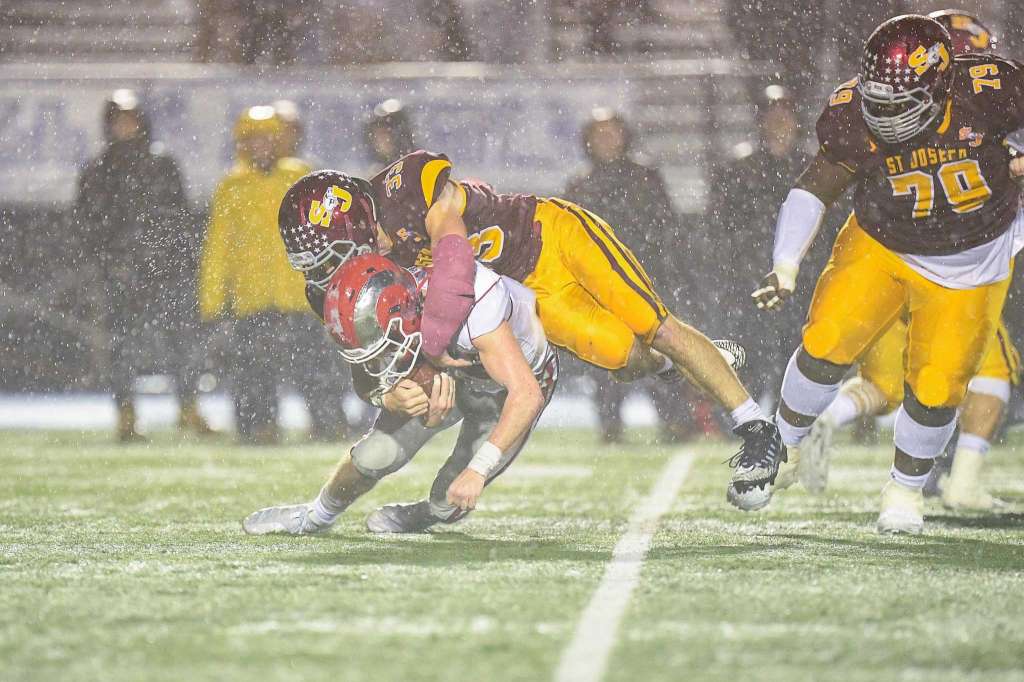 Junior Quarterback Jack Wallace is the first SJ Football player to win the award and the first CT junior since 2013. Click here to read more about Jack's incredible season! 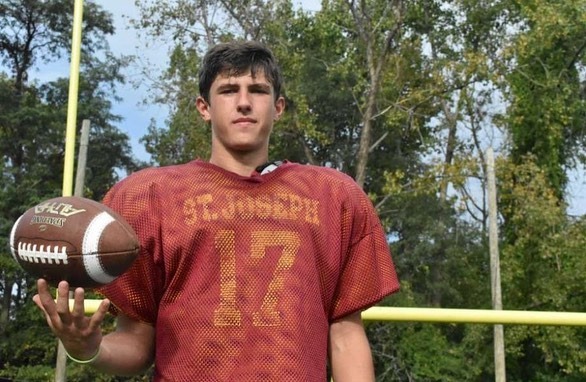 Shirden's effort led the Hogs in a 49-7 win over the Warriors. They will take on New Canaan in the Class L Semis on Monday night at Bunnell HS at 6:30pm. Click here to read more about the quarterfinal win! 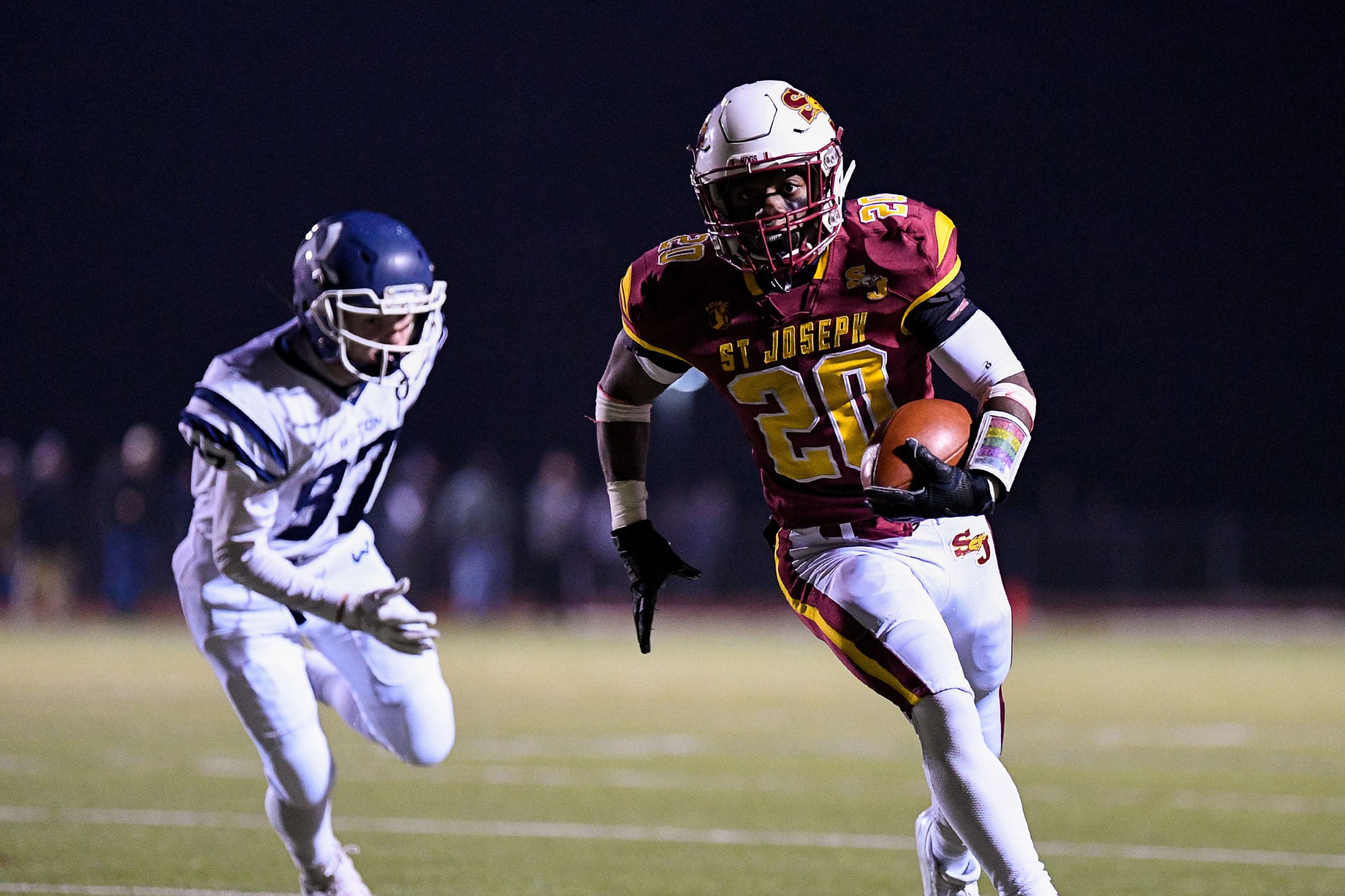 What do the Hogs do when they have a bye week? They go to Al's Angels and help pack food bins for families in need! 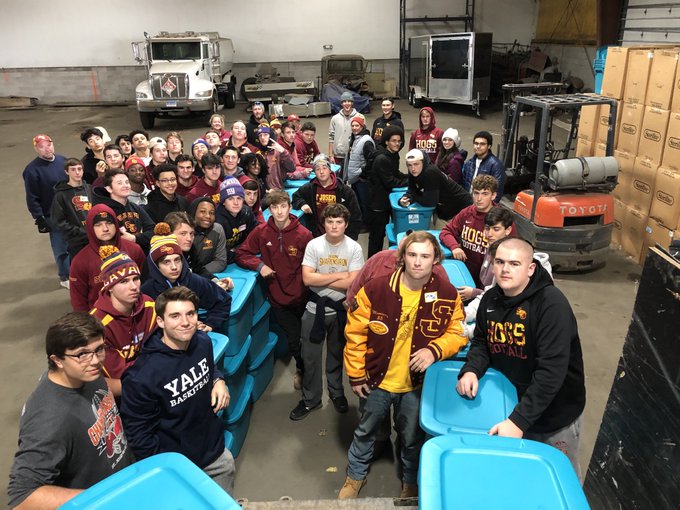 Defense, Shirden's four touchdowns lead SJ Past Ridgefield! Click here to read more about their Homecoming win! The Hogs also honored former players who have passed away prior to the kickoff. 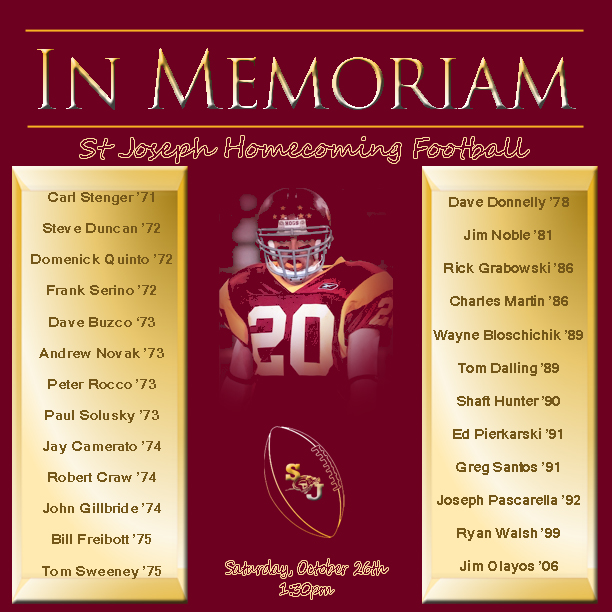 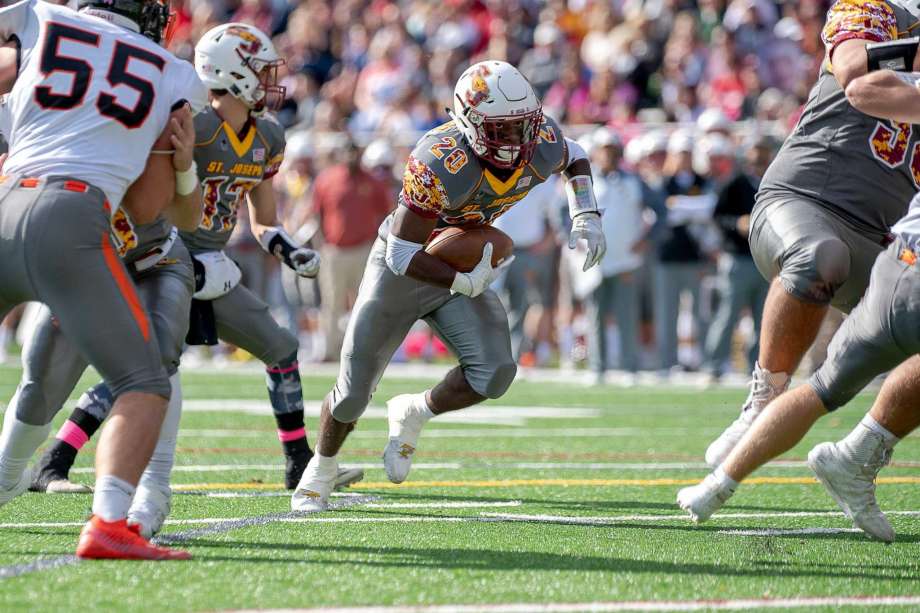 The Hogs Overpower Prep 42-13 to win their 5th straight game! Click here to read more about the game! 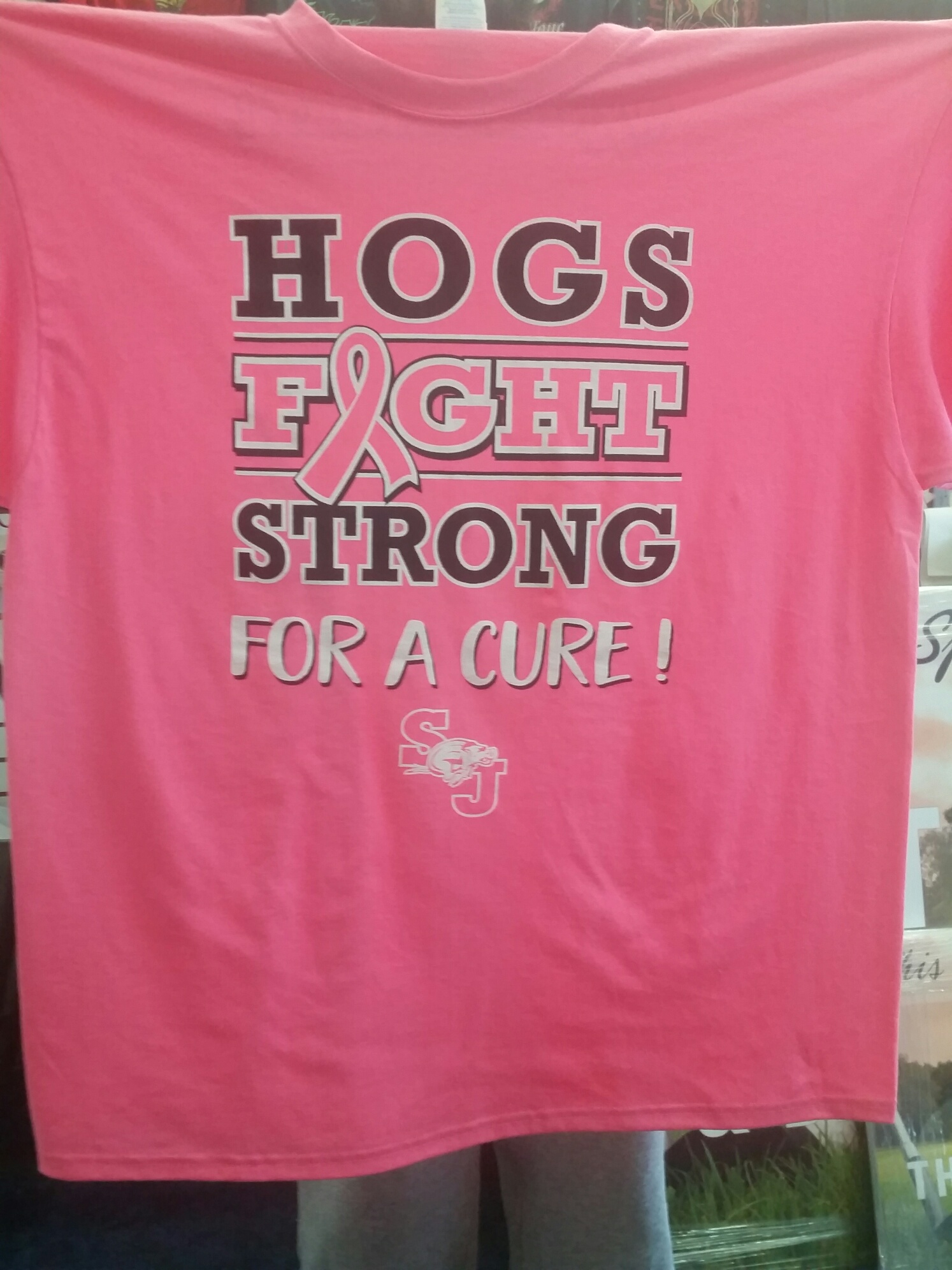 Football is selling Pink T-shirts tomorrow (Friday) before school to raise money for their Making Strides Against Breast Cancer walk on 10/20! Shirts are $20 and all proceeds will go towards the American Cancer Society!

Tickets for Friday's game at New Canaan can either be purchased online at https://gofan.co/app/school/CT20030 or at the gate (cash only). We highly recommend purchasing online to avoid long lines. Tickets are $5 adults and $3 senior citizens/students. Children under 5 years old are free. 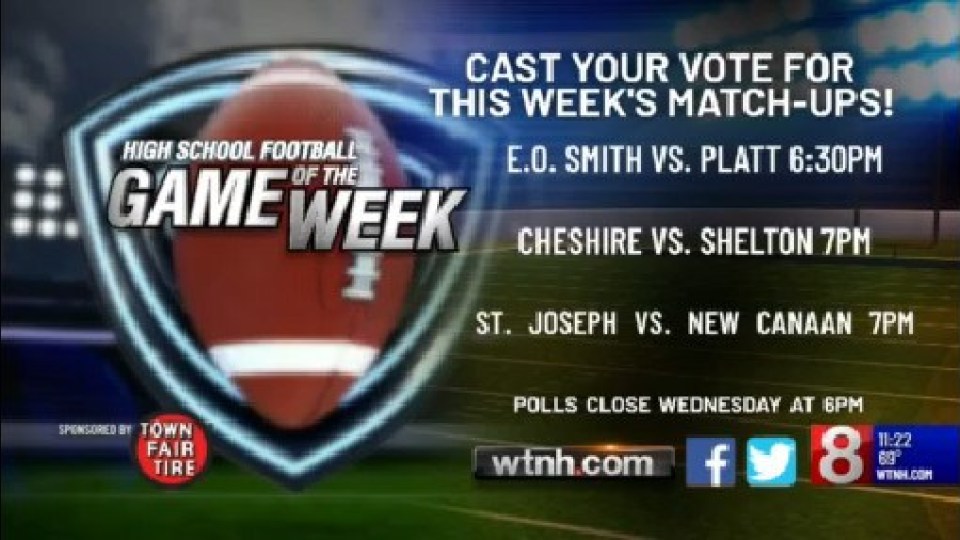 Vote for the SJ vs New Canaan match up for News 8's Game of the Week! Voting is open until 10/2 at 6pm. Click here to submit your vote now! 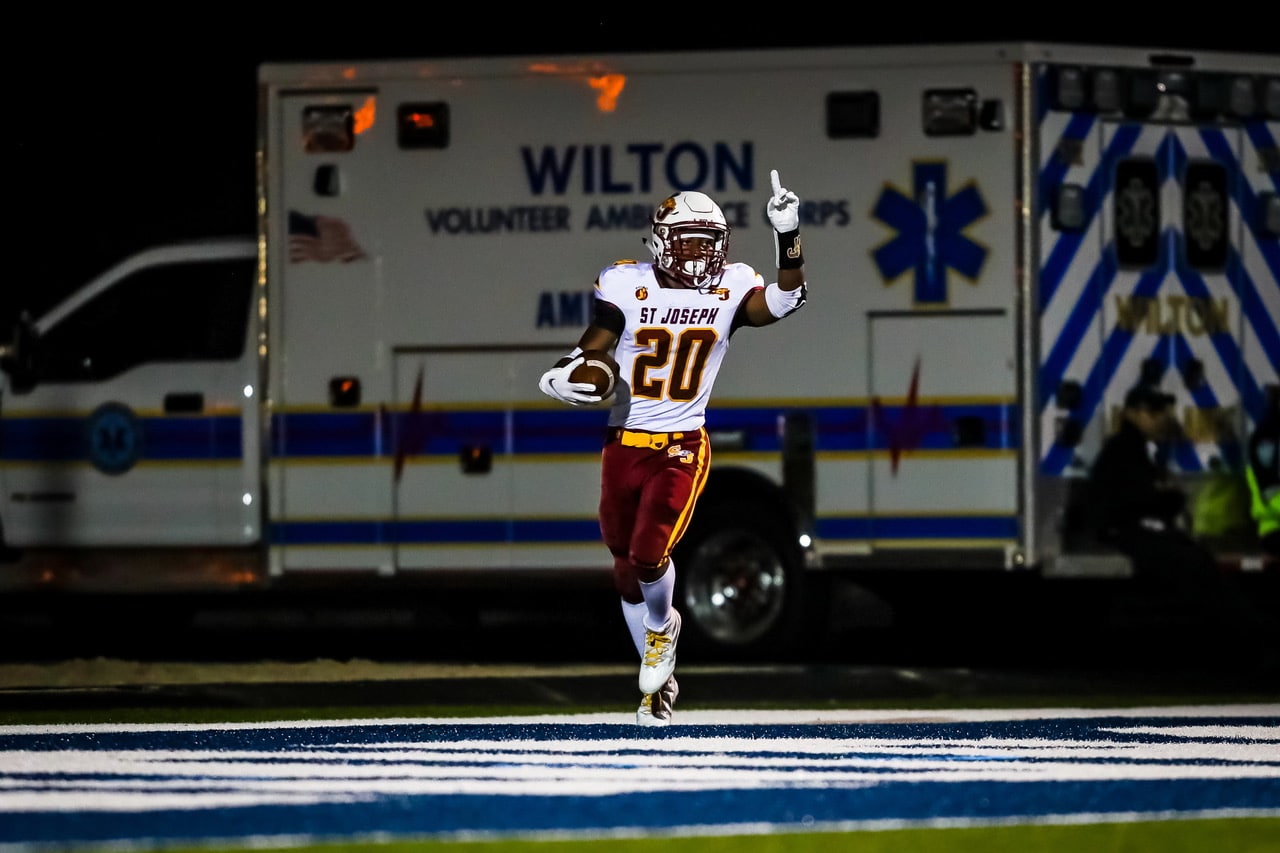 St Joseph Overcomes its Form of Adversity to Roll Past Wilton

Click here to read more about the win over Wilton from the Ruden Report! 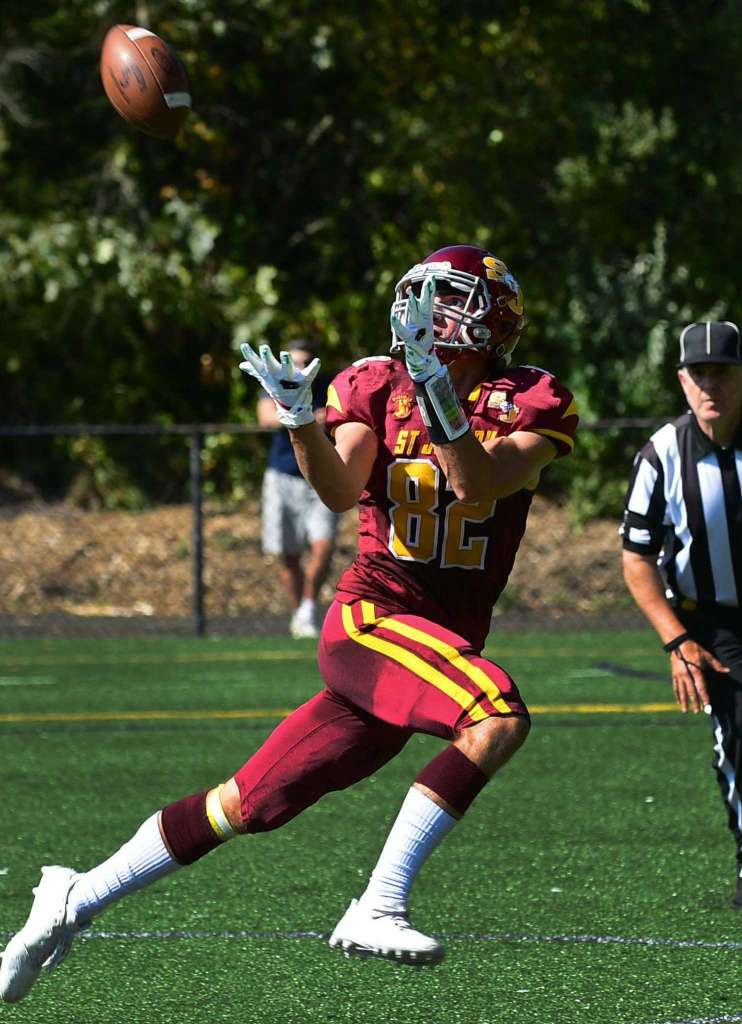 The #2 Hogs cruised past Notre Dame West Have today 42-7 to start the season 2-0! Read more about it on GameTime CT!

Will Diamantis has also been nominated for Ruden Report's Male Athlete of the Week for his dominating play! Diamantis had three touchdown receptions and threw a scoring pass, all in the first half, to give the Cadets a 42-7 win over NDWH. Click here to cast your vote!! 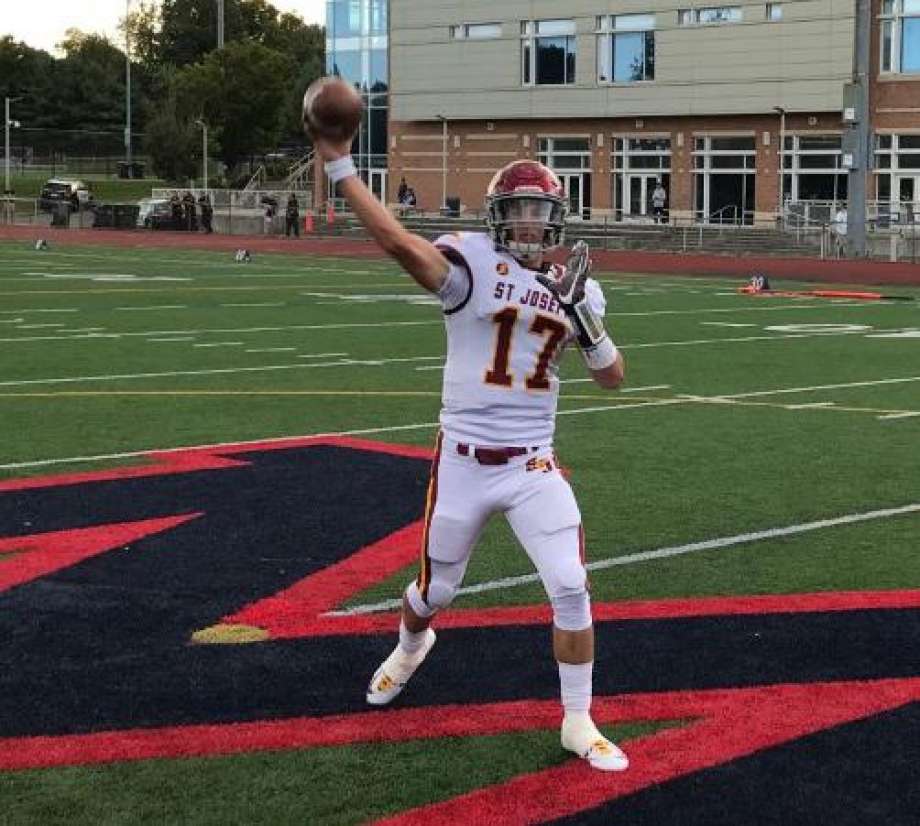 SJ Football opened the season with a dominating 45-0 win over Brien McMahon! Click here to read more about their season opener!

The Hogs look to win a 3rd consecutive State Title in a new division! Read it about here from the Trumbull Times.

Thank you again to Tyler Matakevich, his colleagues in the NFL, the SJ Football staff, current and former players for making the 2nd Annual Tyler Matakevich Clinic a success! We had over 150 athletes brave the heat and come out to work on drills and skills. Athletes also were able to to enjoy some drinks and snacks donated by the NFL Player's Association. Click here to read more about the fun filled day from News Channel 12! And click here to view some more photos of the day. 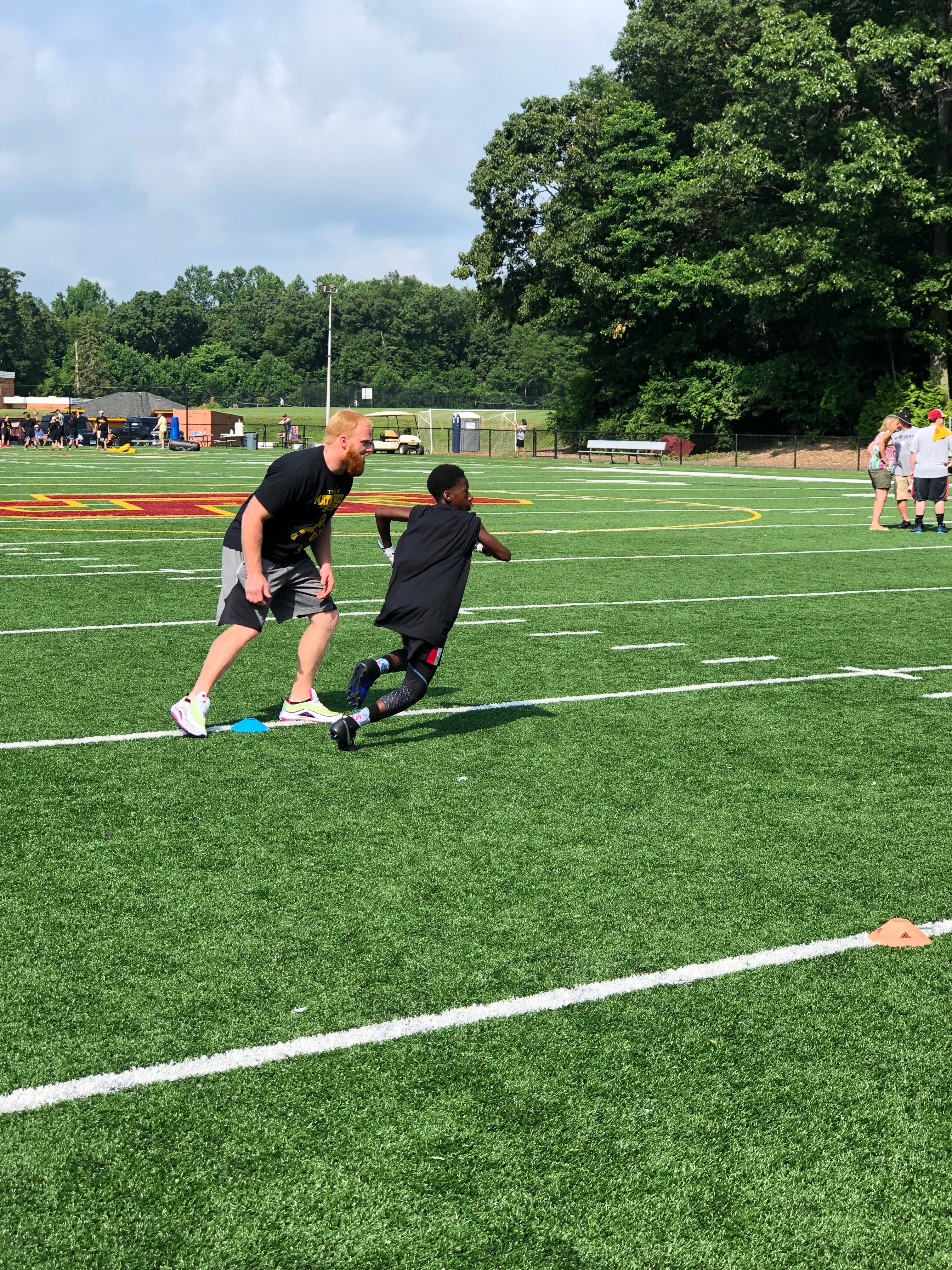 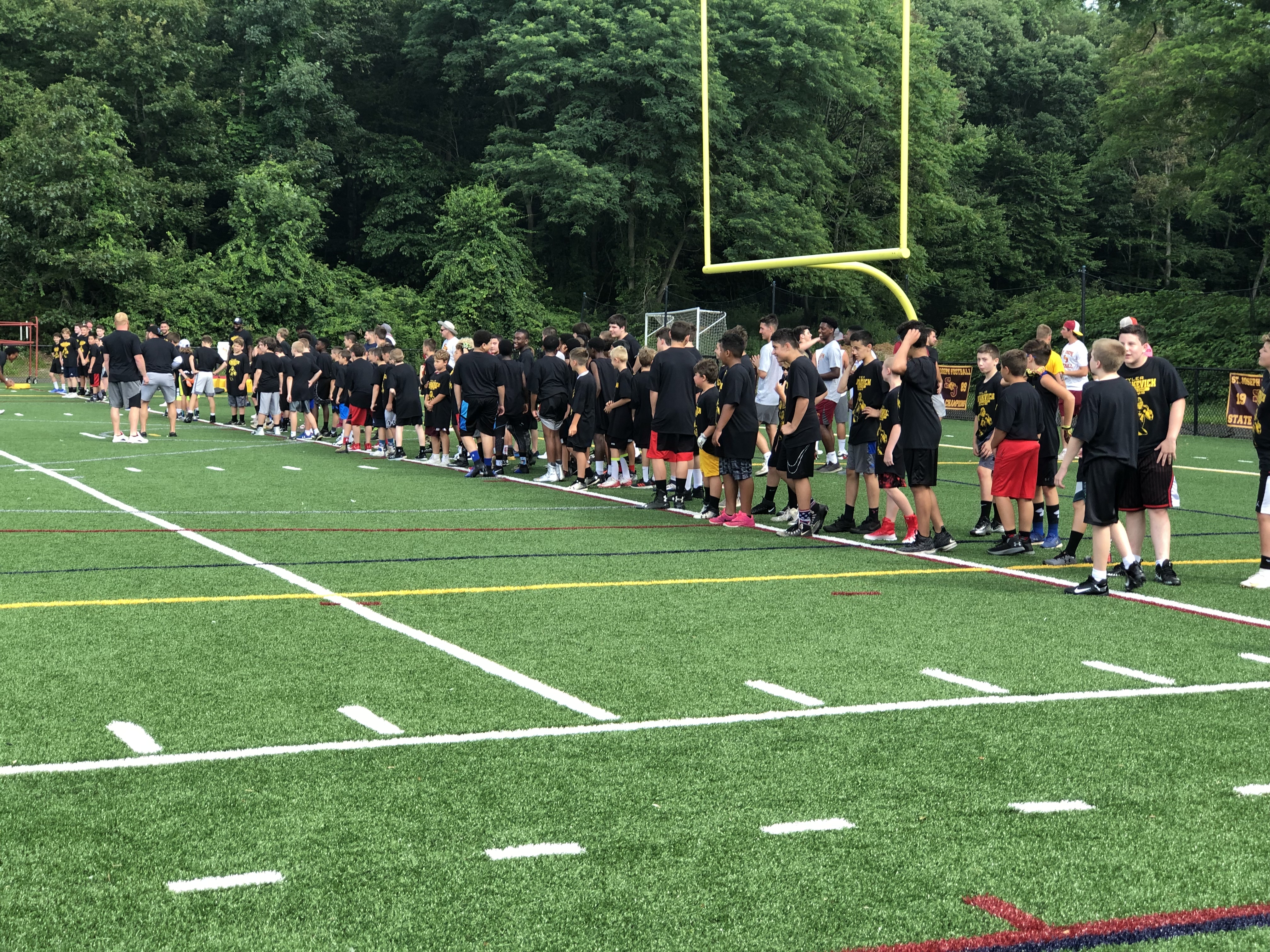 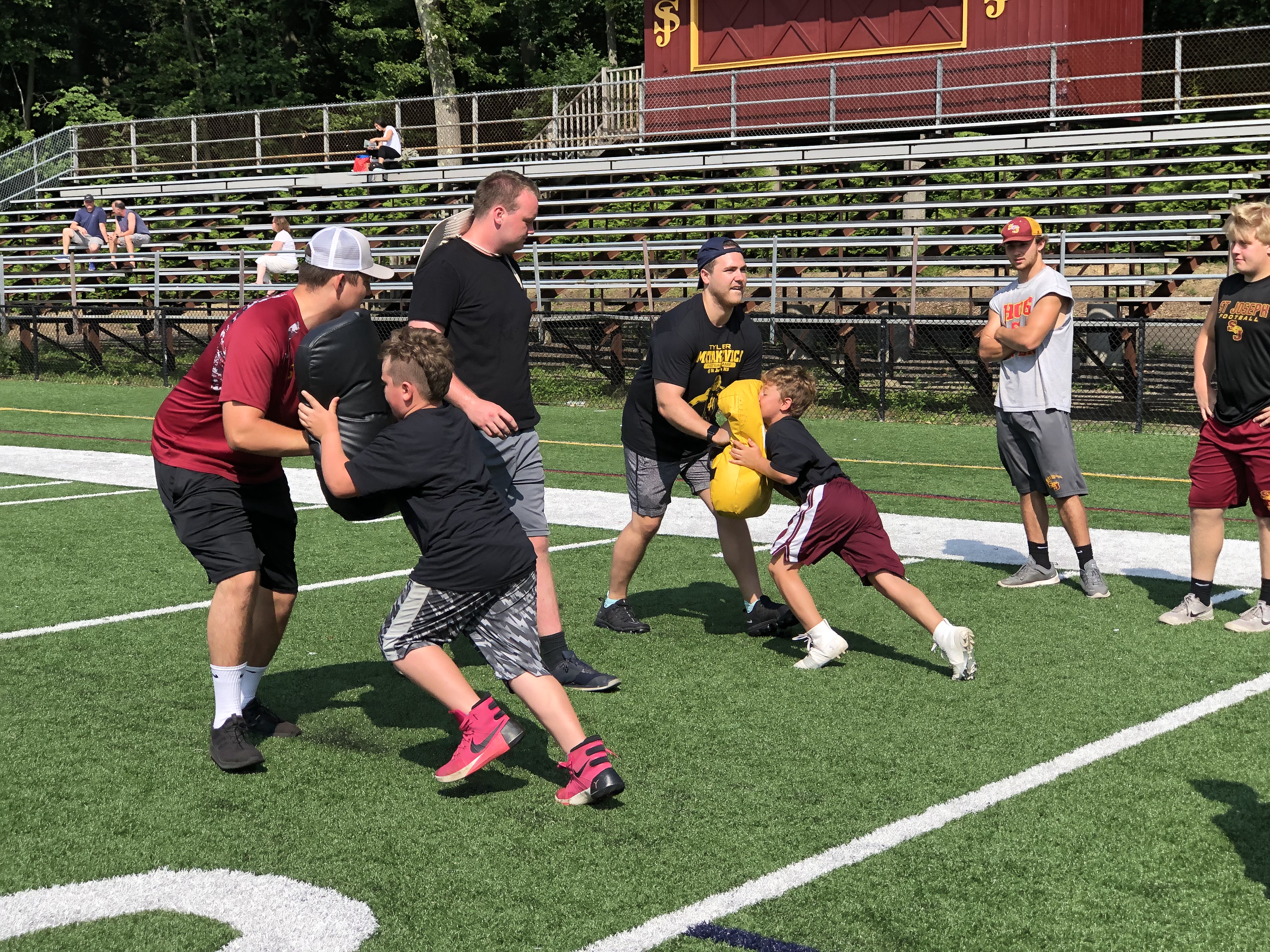 The Hogs are selling Championship Gear to commemorate their State Championship! See what's available below. Order forms can be picked up in the Athletics Office and all orders must be in by Feb 1st! 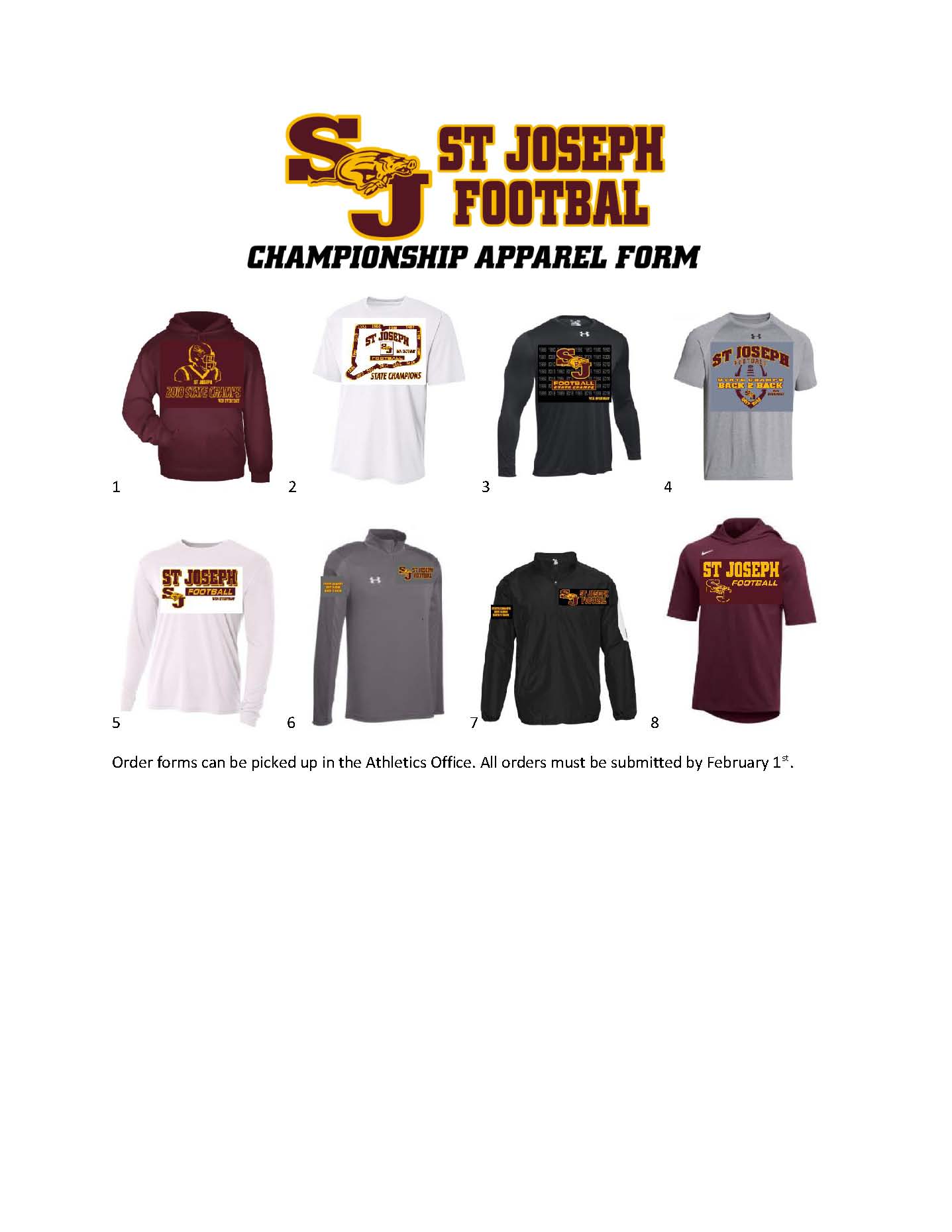 David Summers, Rob Mihaly, Luke Kirby, Jaden Shirden, Mike Morrissey, Jermaine Williams, and Will Diamantis have all been names to the CHSCA Class M All-State Team! Summer and Shirden were additionally named to the Super 26 Team and Summers was awarded the title of CHSCA Player of the Year!!

Click the links to see the full lists from the CHSCA and Walter Camp!

The Hogs overpowered #3 Berlin 70-18 to take the Class M Title! SJ Football has now won their 14th CIAC title out of 17 final appearances. Quarterback, David Summers threw for 6 touchdown to Will Diamantis, Jesse Bike, and Brady Hutchison and ran it in for one. Jaden Shirden ran in 3 touchdowns in the effort and Luke Kirby scored 10 PAT points in the game. The Hogs had previously been the 2017 Class S Champions, make this is their second straight title!

For 3rd Straight Year, Hogs are Playing for State Title!

For the third straight year, the Hogs (11-1) have advanced to the CIAC State Finals! The reigning Class S Champions defeated Killingly High School, the defending Class M Champions, 52-7 in the semifinals to move on. The Hogs will play the winner of the #2 Sheehan/#5 Berlin who play tonight at 6:30pm. The championship game will be held on Saturday, December 8th at 10am at Shelton High School!

The defending Class S champion Hogs dominated Rockville in a 49-7 win in the state quarterfinal game! The top-seeded Hogs, who now stand at 10-1 on the season, will play #4 Killingly on Sunday afternoon at 12:30pm at Penders Field. Killingly, the defending Class M champions, defeated Cheney Tech 62-0 in the quarters to advance.

Tickets for Sunday's semifinal game are $10 for adults, $5 students and seniors, children 5 & under and Military with I.D. or in uniform are free. Tickets can be purchased at the game on in advance online here! 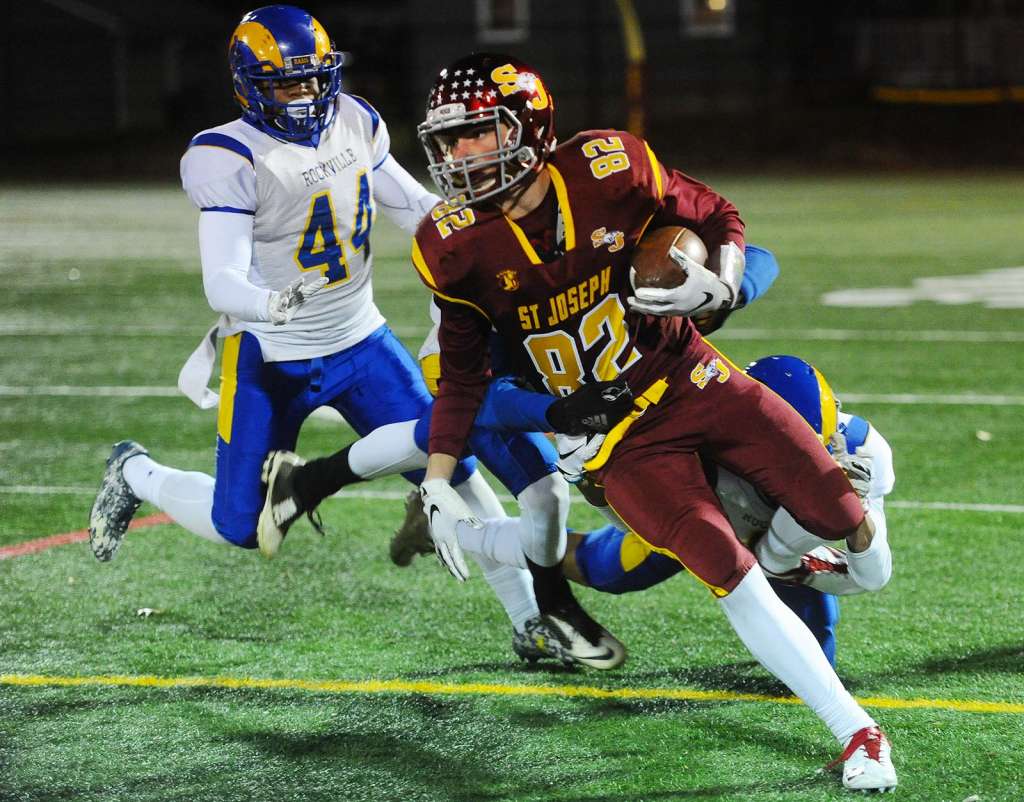 After a thrilling 42-6 win over Trumbull on Thanksgiving, the SJ Hogs (9-1) were awarded the #1 seed in the CIAC Class M Football Tournament! They will play #8 Rockville HS (7-3) tonight at 6:30pm at Penders Field. Tickets for tonight's game are $10 for adults, $5 for students/seniors, Military with I.D. or in uniform and children 5 and under are free. Presale tickets can be purchased online here!

The winner of tonight's match-up will meet the winner of #4 Killingly/#5 Cheney Tech in the Semifinals. To view the full bracket, click here!

Check out highlights from the Hogs win over Staples! 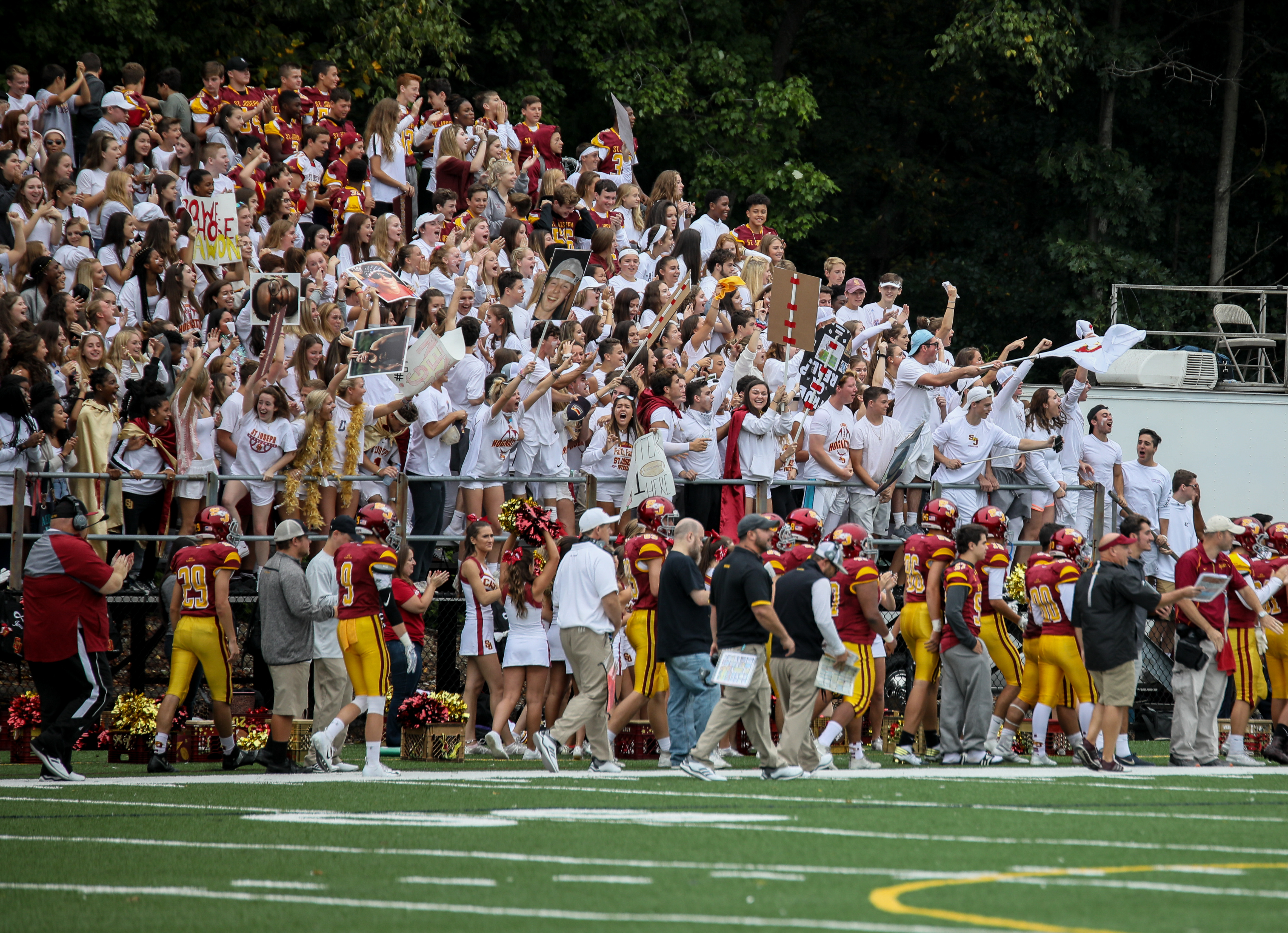 The Hogs shut out #1 New Canaan 28-0 in the season/home opener! See highlights of the exiting game below from CT Sports Now (twitter: @CT_Sports_Now). 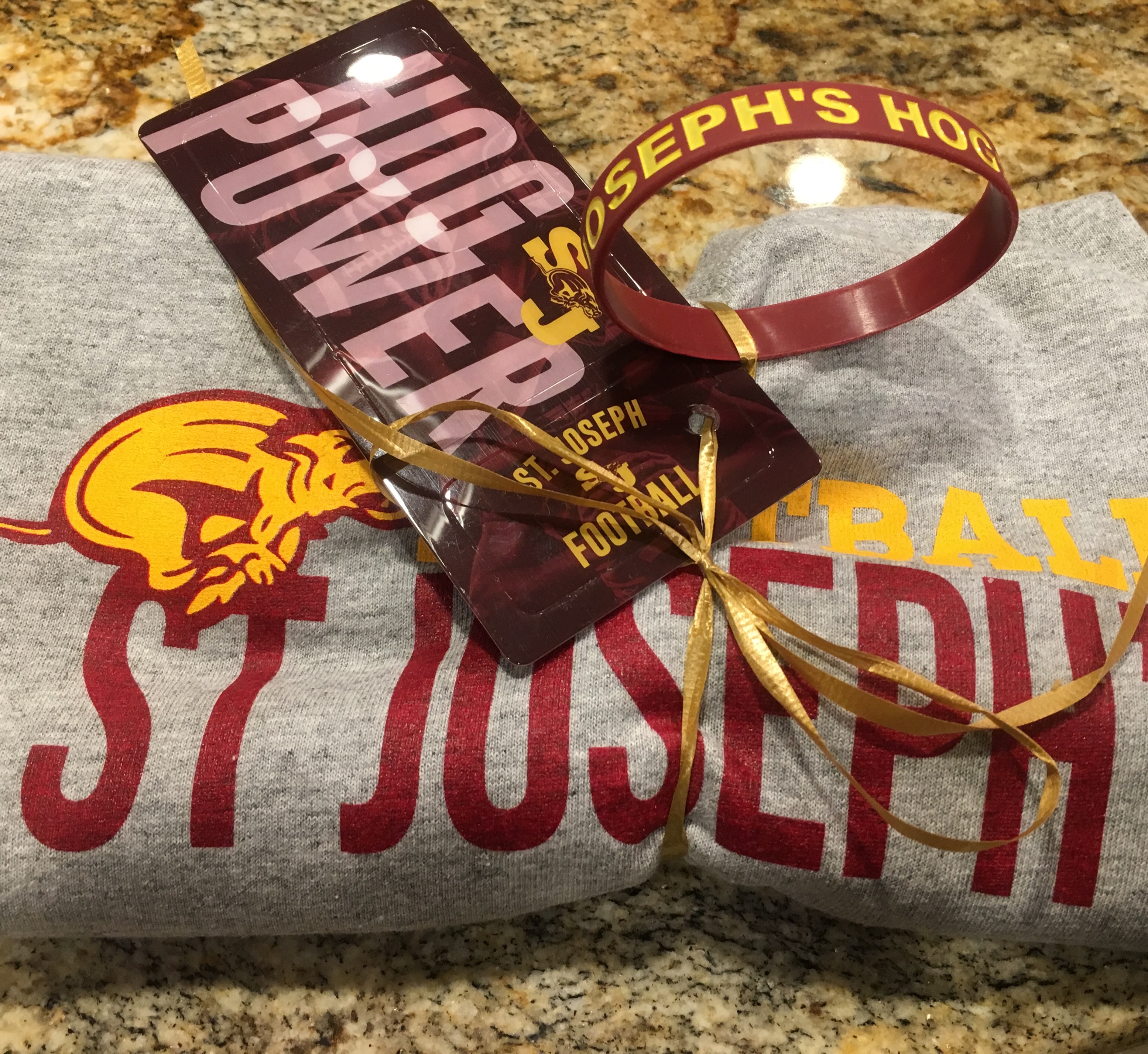 The Football program will be selling football bundles this week! They be will on sale at the Fall Sports Parent's Meeting tomorrow night at 6:30pm in the gym, they will also be on sale before school on Thursday and Friday this week! Bundles include a T-Shirt (free admission to home games for students only), Towel Hog, Football Bracelet, and Schedule Card. Cost is $20 per bundle, cash and check are accepted!

The Hogs are taking over Connecticut! Max Preps released their top football teams in each state and guess who's at the top in CT, you guessed it! Click here to see how the Cadets edged out the rest of the state and to read more about the other teams that made it!